Fogg in the Cockpit signing on August 30th! 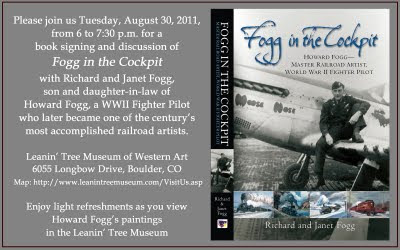 The Most Popular Rumors of July, 1944 at East Wretham Airfield

Following are some of the rumors that swept in, around, and out of AAF Station F-133 during the month of July, 1944. The source of the rumors, in most instances, was dubious. Naturally.

“The sister of a friend of a friend of mine, employed by a large pennant and flag making company in the state of New York, reported in a letter to her brother that the factory had just received an immense order to make several thousands of small banners with thereon ‘Welcome Home Eighth Air Force’. The order, received during the first week of July, was to be completed at any cost before the 15th of August.”

As a result of this, another rumor, of undetermined origin, said that:
“In addition to the ‘Welcome Home, Eighth Air Force’ banners, an order had also been received to prepare as many thousands of pennants that would read, ‘Goodbye, Eighth Air Force’.”

Another possible outcome was:
“News from home” that the statue of Liberty has recently been adorned with a vast neon display, to be lighted some climactic evening with the joyful greeting ‘Hello Eighth Air Force’. There is a possibility that the Ninth Air Force will also be said ‘hello’ to. At any rate the sign is of such magnitude that it can be seen from a very great distance at sea."

Rumors of movement were thick:
“Colonel Tacon, Station and Group Commander, is said to have a bet, amount not known, with Lt. Col. Grady L. Smith, Station Executive that by Christmas of this year the 359th Group will have been to the States, everyone will have had their leaves and furloughs and will then be in another theatre of operations.”

From Eighth Air Force Headquarters came the ‘news’ that bomber divisions were ready to move:
“Tropical serum has been issued, training for the Pacific Theatre has been completed, shipping weight has been calculated, personnel have received new equipment and every Eighth bomber station in the ETO is in a state of eager readiness.”

The Fighter Command was another thing:
“We are not expected to follow the bombers for some time. It is said that the entire command will be put on DS to the Ninth Air Force, to move to France and to operate in a fighter-bomber and ground attack capacity until the bombers are ready for their ‘little friends’ somewhere in the Burma-India-China Theater. No part of the Eighth Air Force, in this move, will go through the United States, but proceed via the Mediterranean Sea the Suez canal and the Indian Ocean to their destination in the tropics. Part of the Fighter Groups will move to fields in France, as they become available.”

There were also other, less exciting rumors:
“Rotation was soon to begin in the Eighth Air Force,” indication enough that home was a thing far away.

From nearby Bodney:
…a visiting crew chief told a friend that the 352nd Group was going “off ops” on the 1st of August, which somehow later became the 15th of August. And the operational career of the 359th in this theatre was drawing to an end, too. By the 15th it was said that we would have nothing more to do than ‘sit around and wait’ for orders to pick up our stuff and go - with China once more the end. 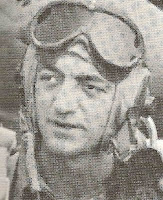 On August 1st (1944) we furnished ramrod support for heavy bombers of the 3rd Air Task Force who were carrying out provisions of the Buick plan #12, which was to drop supplies by parachute to Free French Forces in Southern France. The mission was uneventful from a combat standpoint. Lt. Elby J. Beal was forced to land on a landing strip on the Normandy Coast because of trouble with his airplane. An account of his experience while on the Normandy beach head, written by Lt. Beal, is as follows:

“I was on a mission near the Swiss border. We were escorting B-17s that were dropping supplies to the Maquis. As we were leaving the target area my prop ran away. I was flying at 11,000 at the time. I lost 2,000 feet altitude trying to stall the prop into high pitch. Started on to Sweepstakes running the engine from 3800 to 3500 RPM, and eighteen inches to 23 inches manifold pressure all the way. Crossed the lines at 4,500 feet. Had radio contact and a steer from Sweepstakes by then. The engine was extremely hot and smoking bad. Gas was low too. I was looking for an open field to land in when I saw a landing strip off to the right. I turned over that way and was nearly there when the engine started quitting. Was going to make a belly landing then decided to lower wheels which made me almost undershoot the strip. I landed on one end, and a shot up B-24 landed on the other. I turned off soon as possible. They sent a Jeep out after me and I reported to flying control then to operations. They had no facilities for repairing P-51s at this base as the P-47s, which the organization used that was stationed at this base did not use the same type prop as the P-51. However the engineering officer said he thought he could get a crew and engine from a strip near there. By that time it was late. I had met a Doctor who invited me to spend the night with his unit. They had a nice hospital set up in an apple orchard near there. They gave me a good meal and a cot. About that time German planes started coming over and I spent most of the night in a fox hole. They had been digging them deeper every day. The most danger seemed to come from our ack ack, which seemed to shoot in every direction. The Jerry planes came over real low and dropped bombs several times, some of which hit pretty close. Next morning I reported to the operations tent, and told them that my plane would be repaired and I was going to fly it home. They had made arrangements for me to go to London with the B-24 crew and said I would have to report to 9th Air Force Headquarters. Orders had been cut sending us back. We were sent up in a truck. Asked the driver to wait until I found out if I could go back with him. I finally got permission to go on back, and went outside and found my flying equipment, but the truck had left. I started hitch-hiking back to where the plane was and got there about 3:00 PM. The crew had just started working on the plane. They were a mobile repair unit. They pulled the plane out under a tree and by 3:30 PM the next day had changed the engine and prop governor. I then ground checked the engine and went to flying control to get a clearance and took off. I was treated very nicely while at this base. The crew that changed the engine did a good job in the shortest possible time. They were very efficient.”

This excerpt from Fogg in the Cockpit is from Howard's diary:

Up at 0815. Briefing at 0930. Took off at 1110. Duplicate of yesterday’s show in every detail but flight time. I led Olson, White, and Keesey. My #2 and #4 planes got lost in very rough air of overcast. Picked up Kosc for #2. Homeyer flew #4 later. Encountered heavy flak near Ruhr so everyone split up as usual. Major Shaw led. I became Blue Flight. We only had eight planes out of 16 for escort duty. Never saw the ground; went from here to Munich and back on instruments.
Couldn’t release my left tank and it pissed me off highly. Then it fell off on my landing approach.

Sure was tired. Up for 6 hours and 10 minutes. A long ride. Plane ran fine, loads of gas. Damn this lousy English weather. 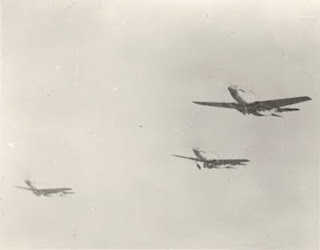 P-51s from the photo archives of Howard Fogg.
No comments:

His chute was afire when he jumped...

This excerpt from Fogg in the Cockpit is from the narrative History of the 359th Fighter Group, Office of the Group Historian, June 1944 dated 4 July 1944:

On D plus 2, the heavies went after the bridges over the Loire, seeking to snap the fabric of the railroads there as medium bombers had previously chopped every line over the Seine.

Again the weather was execrable, haze and low ceiling, but Colonel Murphy discussed all that in a memorable line (“Weather is weather, and all weather is bad.”) and by 0627, when 45 planes took off, the mist had in fact cleared, although scud and mist rolled back over the field for the landing at 1150. There was a great score for strafing, especially in the 369th Squadron, which caught a German convoy control point at a crossroads and wiped out 26-odd vehicles.

But by now the Germans had light flak guns by the dozen at every vulnerable point, and there were two losses, 1st Lieutenant Benjamin M. Hagan III, one of the 368th Squadron originals, and Lieutenant Robert B. Sander, of the 369th. Sander was believed to have crashed in the woods near the control point but Hagan jumped after being hit in a wild strafing bee on a train southeast of Breteuil. The tall, lean, dour-faced jokester owned a questing mind, fortified by a rare depth of spirit. Aged 19 when he arrived in England, he had lived a curiously full life, although all of this was customarily masked in the prankery by which he was best known. He habitually explained he had become a fighter pilot to escape the perils of the explosives plant where he had been working and it was usually impossible to decide at what, if any point, his fantasies ceased to be fact. Two friends, Earl Perkins and Bill Simmons, followed him down and though his chute was afire when he jumped, both saw it later, empty, in a field.