June of 1944 was the month that Eisenhower stormed and breached the Atlantic Wall of Festung Europa in the greatest short-range operation of war in the history of man to that time.

In the great scheme of assault, the VIII Fighter Command, forged and tempered as the peerless high altitude fighter team of all the world’s struggling forces, was slung into the rough and tumble of ground attack. Only their airplanes had the needed range before the cannon and the tactical air forces could be disembarked, and only they could choke off support from the Werhmacht at the chosen storming place, the Cotentin Peninsula of Normandy.

So simply, is the story of June for the 359th Fighter Group told. With the 14 other groups of the Eighth Fighter Command, they isolated Normandy, hacked and splayed the German plan of reinforcement and counter-attack, and held off the Werhmacht while ships and men tore open a bloody hole in Western Europe.

It was expensive, 14 pilots were lost on tactical missions, 11 of those in the first 7 days of crisis, and this was one-sixth of the 359th Group’s normal pilot strength. Yet the total casualties for the month of 17 men, 16 operationally, was below the toll of May, and was well under the depletions suffered by other groups.

These are statistics, and they did not cushion the emotional shock of the grim second week of June, when 21 missions in 7 days cost 11 pilots, when foul weather, flak, fatigue, and warring enemy aircraft raised the normal odds against ground strafing to a great and nerve racking hazard.

Better Make Up Your Mind

Excerpt from Fogg in the Cockpit, the wartime diary of Captain Howard Fogg:

One mission. Nuts!! Took off at 0615. Blue Flight led by me, with McNeil, Andy, Hammy, and Murphy. Top squadron. Flew an area escort to Brussels, Namur airfields. We encountered heavy flak at Namur but no trouble and no enemy aircraft. Flew at 26,000 to 27,000 feet in nice squadron formation. Really clear over the Channel. Back at 1000.

I was told at supper of my transfer to the 368th and Taylor’s transfer back to 369th. I’m glad yet sorry. Good to rejoin the old outfit, but the 370th flies better and has better engineering, etc. Sorry to leave Colonel Murphy, a wonderful pilot and leader.

Taxied my ship over to the 368th, moved flying equipment after supper. Major Brown, ’40, Panama for three years, 1,200 flight hours, is the new 368th operations officer. He seems like a good guy. So I’m “home” again and it’s okay. 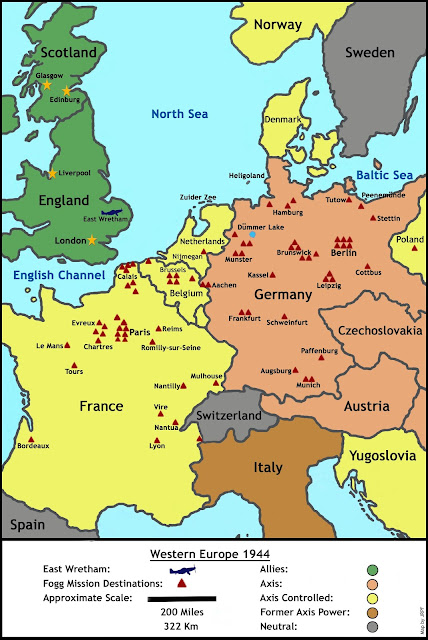