Bruce Leaf of the Longmont Weekly interviewed us regarding Fogg in the Cockpit, and the article has just been published!

Here's the link to the article:

One slight edit, is that after we met with Bruce the release date of the book was extended a few weeks. It will be released by Casemate Publishing on June 19, 2011.
No comments:

Today we thought we would travel back ninety years in time, to November 24, 1921, when Howard traveled with his parents to the Mountain Lakes, New Jersey Railroad Station. This was Thanksgiving Day, and as they waited in this stone station built in 1912 by the Delaware, Lackawanna and Western Railroad, Howard sketched trains on a blank note card. Only four years old, even then Howard could capture the essence of a locomotive. 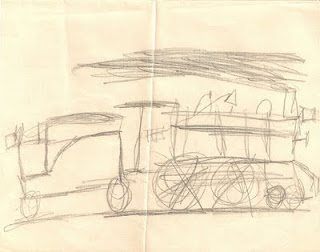 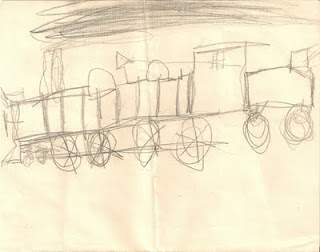 During his 50-year artistic career it is estimated that Howard Fogg completed more than 1,200 paintings. A number of these images continue to be printed in calendars and as greeting cards, but the majority of the original paintings reside in offices, businesses, museums, and the homes of those who loved his ability to capture the emotion of railroading. 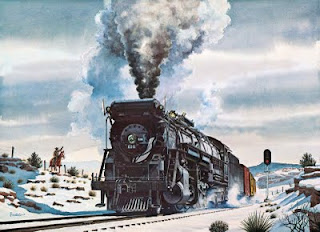 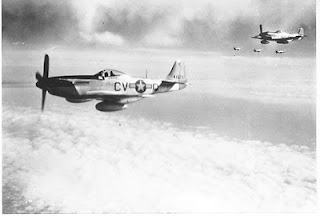 P-51B CV-Q 44-15717 (368FS) in flight with a flight of four. Photo courtesy of Elsie Palicka, wife of Ed Palicka, 370th Fighter Squadron Photographer: Archived by Char Baldridge, Historian, 359th Fighter Group Association.
Given its illustrious history and reputation, you would think the P-51 might have been featured in multiple mainstream films. Nope. To the best of our knowledge there is a grand total of one film that is centered around the P-51, and it takes place not in WWII but Korea. The 1957 release of Battle Hymn (widescreen, color) used Air National Guard Mustangs with the American southwest substituting for Korea. There isn't any actual combat footage but the staged attack and flying sequences give the viewer a glorious look at the P-51.

That's it. There are P-51 "sightings" in a few movies such as Empire Of The Sun, Saving Private Ryan, Memphis Belle, and, if memory serves, the 1968 film Dark Of The Sun, set in the Congo.

Ironically, the plane the Mustang was most often called upon to escort - the B-17, has had it's fair share of exposure. The 1943 film Air Force, set in the Pacific, revolves around the B-17 "Mary Ann", and the 1990 release of Memphis Belle follows the story (Hollywoodized) of the real "Memphis Belle". Another 1943 release, Bombardier, centers on bombardier training in B-17s. It was filmed, in part, at Kirtland Army Air Field in New Mexico, where real training was taking place. 1962's The War Lover stars Steve McQueen in the title role as a B-17 pilot. In 1948 Command Decision concentrated on the thought process behind the strategy of daylight bombing and target selection. Based on the play of the same name, there are a few B-17 scenes in the movie. The following year the Academy Award winning Twelve O'clock High emphasized the toll the decision making took on those in command, but it also utilized Allied and German combat footage of B-17s in action. Both Command Decision and Twelve O'clock High were set in 1943, before the deployment of the Mustang, and focused on the terrible losses the bombers incurred without long range fighter escort.

George Lucas is co-producing a movie titled Red Tails, about the Tuskegee airmen. Due for release in 2011, it stars Cuba Gooding, Jr, who also starred in HBO's Tuskegee Airmen. Since it will, presumably, be set in Italy, it means there still is not a single movie featuring P-51s flying out of England. Who knows, maybe Fogg In the Cockpit...

We'd love to hear from you about any other P-51 sightings in film or TV.
3 comments:
Newer Posts Older Posts Home
Subscribe to: Posts (Atom)