1. The Unit Citation of the 359th Fighter Group for action against the enemy on 11 September 1944, as published in General Orders No. 436, Headquarters 1st Air Division, dated 2 June 1945, is approved.
2. Subject General Orders have been forwarded to the Adjutant General, Washington, D.C., through channels, requesting confirmation in War Department General Order.
3. You are hereby authorized to advise the 359th Fighter Group that it is entitled to a citation streamer and that all personnel assigned or attached thereto, as defined in paragraph 4a, (1) and (2), Section IV, Circular 333, War Department, dated 22 December 1943, are entitled to wear the Distinguished Unit Badge.

THE 359TH FIGHTER GROUP is cited for extraordinary heroism, determination, and esprit de corps in action against the enemy on 11 September 1944. On this date the 359th Fighter Group was assigned the task of providing penetration, target and withdrawal support to bombardment forces attacking objectives in Germany. At 0921 hours a total of 49 P-51 airplanes took off from home base in England and proceeded to rendezvous points and assumed escort positions. At 1115 hours in the vicinity of Giessen, Germany, 50 Me 109s and FW 190s were sighted at 32,000 feet preparing to attack the trailing bombardment formation. Pilots of the 359th Fighter Group immediately dispersed and rove the hostile fighters to the deck destroying one and damaging two.

Constantly on the alert for possible interception this unit observed a number of enemy aircraft taking off from an airfield near Gothe, Germany, at 1130 hours and aggressively dived to attack.

Exhibiting the highest degree of courage pilots outmaneuvered and destroyed five (5) Me 109s in the air and then in the face of anti-aircraft fire strafed and destroyed four (4) Ju 88s and Me 210 and damaged four (4) others. Shortly thereafter an estimated thirty (30) Me 109s and FW 190s were sighted heading east at 30,000 feet on the bomber track. Although outnumbered an element of the 359th Fighter Group determinedly attacked the enemy and in close combat destroyed (2) and damaged another. At 1150 hours over 100 hostile fighters were seen at 30,000 feet, north of the bomber formation, and pilots of this unit immediately proceeded towards the enemy. Opening fire with vigor and determination they destroyed four (4), probably destroyed (2) and damaged one (1) and then in individual dogfights destroyed an additional four (4) of the enemy.

Meanwhile other pilots of the group descended to a grass landing ground in the vicinity of Kolleda, Germany, and in diving offensive tactics destroyed four (4) and damaged (9) parked aircraft. At 1205 hours in the vicinity of Eisleben, after the target had been bombed, 15 Fw 190's executed vicious attacks on the bomber formation. The 359th Fighter Group aggressively moved to the scene of this action and in daring offensive tactics destroyed six (6) of the enemy aircraft, probably destroyed an additional two (2) and damaged one (1) other. On the return to home base this unit destroyed seven (7) locomotives. The conspicuous intrepidity, aggressive tactics and esprit de corps displayed by pilots of this unit on this occasion accounted for the destruction for thirty-five (enemy aircraft and contributed to the safe escort of the attacking bombardment formation. The actions of this unit reflect the highest credit upon the 359th Fighter Group and the Armed Forces of the United States. 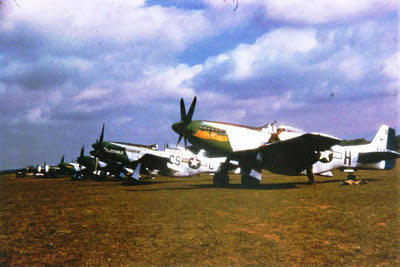 The “one big day” so long awaited by the 359th Fighter Group arrived 11 September (1944), as the Group completed nine months of operational flying over Europe.

Ten men did not return from the missions on these two days, as a revivified Luftwaffe fought savagely against the joint Anglo-American attempt to make successful a final bombardment softening of the Reich for the ground assault...

...The strategic plan of the Eighth Air Force was to push 75 bombers across Europe on the shuttle run to Russia, under cover of a heavy assault on oil plants of the Leipzig area. This was done, the 20th Group making the long escort ride to Russia, but the Luftwaffe, up in strength, knocked down at least 20 bombers in the other forces (the total loss was 52) and itself suffered losses of 17-23-44 to the bombers, 116-7-23 to the fighters and 42-0-43 on the ground.

There were several remarkable individual performances. Cyril Jones shot down four in the air over a landing field and also destroyed two more on the ground and damaged four others. Captain King got an aerial triple, Claude Crenshaw accounted for two in the air and another on the ground, Grant Perrin, Louis E. Barnett, George F. Baker Jr., and Gilbert Ralston all destroyed two in the air.

One of the four men NYR got separated from his own outfit, joined up with the 4th Group and was seen by them to shoot down an Me109 in the air before crashing to flak on a landing ground. He was identified only by his 359th green nosed airplane.

Excerpts from the original monthly narrative History of the 359th Fighter Group for September 1944 dated 4 October 1944 and included in Fogg in the Cockpit, were transcribed and archived by Char Baldridge, Historian, 359th Fighter Group Association, from records at HQ USAF Research Center, Maxwell Air Force Base, Alabama.
No comments:

We owe them so much

Although the veterans of World War II are all but extinct, their legacy surrounds us. Every time we read an uncensored newspaper, practice the religion of our choosing, cast a vote, or do any of a hundred little things we take for granted, they are there, looking over our shoulder. Let us never, ever, forget Pop, Baldy, Hag, Bo, Kib, Brownie, Ollie, my father, and all the other members of the armed forces who put themselves in harm’s way then and continue to do so today. We owe them so much. 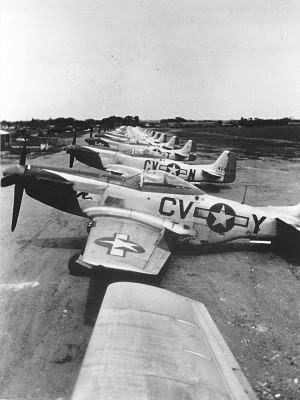 Howard Fogg would often create a “rough sketch” for a customer to ensure that his vision for the final painting matched their expectations. Depending on the circumstances, the sketches were done in either pencil or watercolor. This example is presented with Howard’s original notations. 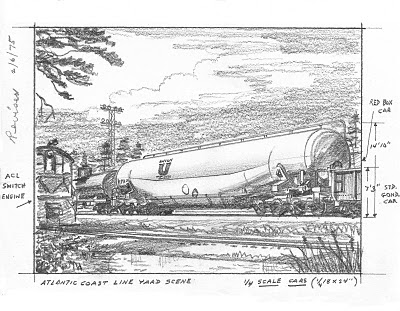