For many people the iconic B-17 bomber is the face of the US Army 8th Air Force's participation in the European Theater of World War II. Their missions deep into the heartland of industrial Germany helped turn the tide of war, but they could not have succeeded if it were not for the protection afforded them by the pilots of their long range fighter escorts.

One such pilot was Howard Fogg. Prior to his distinguished career, which spanned six decades and often saw him referred to as the dean of American railroad artists, Captain Fogg kept a diary during his combat tour in England. Based at US Army Air Force Station 133 northeast of London, Fogg flew a total of 76 missions in both bomber escort and ground attack roles.

From a backstage encounter in a London theater with Lawrence Olivier and Vivien Leigh, to the pre-dawn chaplain's benediction on June 6, 1944, to a mission escorting B-17s flying down a valley in the snow capped French Alps as they dropped supplies to French freedom fighters, Fogg in the Cockpit offers a first hand look at his fascinating and often unexpected story.

Uncolored by time and subsequent events, this is not a memoir but the gritty day to day life of a fighter pilot documented as it unfolded.
The diary, presented in its entirety, is augmented with a wealth of additional material, including a biography, period photographs, examples of Howard's art from both before and during his career, excerpts from the base chaplain's monthly reports, and supplementary details which enhance many of the terms and events referenced in the diary.

Ultimately, Fogg in the Cockpit is more than just the story of one man's service. It presents the reader with a unique perspective during a pivotal moment in world history, as the Allies gained momentum for their final push to victory. 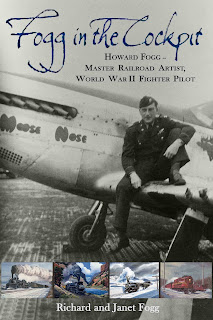 “As an ex fighter pilot I read the book with great anticipation and was rewarded with a gem.”

“Howard Fogg is one of those rare people who managed to keep a diary whilst engaged in fighting during the Second World War. It's "witting testimony" of the highest calibre, and a most welcome addition to the library of reminiscences of this most recent world conflict. Add to this the genuine and amazing talent of Fogg as an artist, and you have a most fascinating read - the appendix of beautiful colour paintings by Fogg is a welcome addendum. A remarkable book indeed.”

This book represents a labor of love for a family whose father (Howard Fogg), a renowned railroad artist, had served during the Second World War as a fighter pilot with the 359th Fighter Group of the United States Army Air Force (USAAF), which operated out of Britain between 1943 and 1945.

The heart of the book is made up of diary entries that Fogg had made between October 1943 (the month that the 359th arrived in Britain) and September 1944, when he completed his combat tour and returned to the United States. The historical commentary, which is interspersed throughout this book, provides a wonderful touch, which gives an added perspective on the contributions and sacrifices made by the USAAF in Europe towards the defeat of the Third Reich.

The reader is given entree into the day-to-day existence of a fighter pilot and its sometimes mundane aspects aside from the pressures and hazards of combat flying. The book also has a generous collection of wartime photographs and several examples of Fogg's postwar railroad paintings, which showcase his considerable talent.

For me, "FOGG IN THE COCKPIT" was one of the best purchases I made this year. Any student of the Second World War or aviation enthusiast will love this book.”