Howard Fogg and Paul E. “Ollie” Olson became good friends at East Wretham, and Ollie is mentioned regularly in Howard’s diary. Their friendship continued after the War and extended to their families, when the Olsons and Foggs became lifelong friends.

(Following is an excerpt from the 368th Fighter Squadron History, 359th Fighter Group, for the month of December 1944.)
“On 18 December, 1944, I was flying “Jigger” yellow leader. At 1220 Lt. Carter and Lt. Collins flying yellow two and four positions left my flight leaving only Lt. Boyd and myself. At 1255, Lt. Archibald and Lt. Olson flying green one and two respectively, joining my flight filing the vacancy. We were flying at 32,000 feet, and were in the vicinity South Aachen. We were trying to climb over the overcast which was 10/10ths in this area. At approximately 1300, Lt. Olson called over the R/T and said that his aileron controls were freezing and that he would have to go down to a lower altitude. Lt. Olson left my flight at this time, and Lt. Archibald went with him as escort. At 1340 in the vicinity of Cologne I heard the controller call “Chairman” and report bandits in the area between Kassel and Cologne at half of “Chairman’s” altitude. “Chairman” acknowledged, but since we were providing close escort, he decided to stay with the bombers. Immediately after this I heard Lt. Archibald call saying that he was at half “chairman’s” altitude, and asked to be vectored to the bandits. The controller replied that he could not vector him to the bandits, but repeated their position. He added that several Groups had already been dispatched to the area. “Chairman” called green leader (Lt. Archibald) and said to be careful whom he shot at for there would be many friendly fighters in the area. Green leader acknowledge, and though he did not say he was, it is assumed he continued on in the direction of the bandits. I heard other R/T conversations between Lt. Archibald and Lt. Olson up until about 1445, and at no time during this period did they seem to be in any trouble.”

“On the 18th of December, 1944, we (Lt. David B. Archibald and myself, Lt. Paul E. Olson) were flying Green flight, 368th Fighter Squadron, 359th Fighter Group, positions 1 and 2 respectively. We were escorting bombers to Kassel, but due to adverse weather conditions, they were forced to turn and pick out targets of opportunity. This weather condition caused the aileron controls of my aircraft to freeze, making it impossible to maneuver with the group. Lt. Archibald and myself descended to about 10,000 feet and proceeded to return to base. We were flying at the base of the overcast, and heard our controller report the presence of sixty-plus bandits at our altitude and near our vicinity. We called for a fix to determine our position in regards to the E/A, but due to our low altitude, could not make R/T contact. After approximately five minutes flying towards base, we sighted a large formation of FW 190s, of approximately the same number as was called in by our controller. We decided that an attack by us would be ineffective, as there were only two of us and such a great number of them. So we attacked from about 30 degrees off their rear, and made for the last flight. On this pass, I saw two A/C burst into flame and the pilot of a third A/C release his canopy and bail out. I claim two A/C destroyed from Lt. Archibald’s fire and one A/C destroyed from mine. Lt. Archibald destroyed one and strikes along the fuselage forced the pilot to bail out of the second. 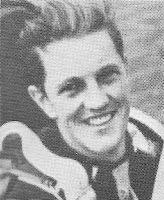 “The enemy did not break formation on this attack, and no evasive action was taken. We again maneuvered to make a pass from the rear of their formation. We pressed the attack from slightly right of rear. Closing in too fast, we over-shot the tail-end flight, and picked off two A/C of the second flight from the rear. Lt. Archibald destroyed the flight leader and I destroyed his number two man, or wingman. On this pass the enemy broke formation, but we nevertheless maneuvered for position to make a third pass. We again pressed the attack from the rear, but this time into a confused looking swarm of A/C instead of a formation. On this pass Lt. Archibald got hits on an A/C and it blew up. I got strikes on the wing and fuselage of another A/C and the pilot bailed out. The pilotless A/C made a slight climbing turn to the left, colliding into another a/c causing them both to explode. We broke sharply to the right to avoid being hit by fragments.

“As we maneuvered for a favorable attacking position, I noticed a few bursts of flak a few hundred feet behind us, and called it into Lt. Archibald. As it was a safe distance behind us, we continued to press the attack for the fourth time. I then noticed an A/C approaching us from about eight o’clock, and a split second later he ceased to be a threat to our safety, as an A/C maneuvering form the opposite direction collided with him, destroying both A/C.

“We continued our pass and as we came into range Lt. Archibald started firing and got hits along the fuselage of an A/C. At this time flak started breaking all around us, and we broke off the attack, but to no avail. Lt. Archibald said he was hit and next instant I found my A/C aflame and then it blew up, throwing me clear. I was covered with burning oil and gasoline, and tried to beat out the flames. I pulled the rip cord when I got most of the fire extinguished, and my chute opened up just in time to break my fall. I did not have a chance to escape, as I had a third-degree burn of my left hand, and both legs, and also my face was badly burned.

“I landed near the railroad station of a little town called Vohn (Wahn), which is about six kilo east of Cologne, and was picked up by a Luftwaffe flak-gun crew. They took me to a doctor on the other side of town, where I was given a tetanus shot. I was later put into an ambulance and taken to a front line hospital called Hoffmonstahl. This hospital was located in a Work Commando Stalag VI-G. Lt. Archibald was picked up the same day near his A/C which he flew into the ground. He was picked up in the same ambulance in an unconscious state and taken to the hospital with me. Our action that day was confirmed by a Pvt. Hunt, who was a captured American medic helping to care for American wounded at the hospital, and was, at the time of the engagement, on the hospital grounds watching the combat actions of Lt. Archibald and myself vs. the Luftwaffe. 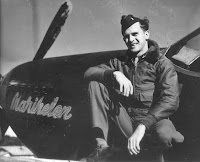 On December 18, 1944, 1st Lt. David B. Archibald and myself (1st Lt. Paul E. Olson) were flying green flight, 368th Sqdn, 359th Gp, positions one and two respectively. We were providing close escort to heavy bombers, and previous to reaching the target area my aileron controls froze, making it hard to control my aircraft. I contacted Lt. Archibald and asked him to drop down to a lower altitude to get the trouble cleared. We descended to approximately 10,000 feet and proceeded towards base. We were flying at the base of the overcast and heard our controller notify the group of the presence of some sixty plus bandits somewhere in the area. We called but due to our altitude could not get a fix. After approximately five minutes flying towards base, we sighted a large formation of FW 190s. We at once pressed an attack at about thirty degrees off rear. During this pass I saw three A/C destroyed. Lt. Archibald’s fire caused one A/C to burst into flame and the second pilot bailed out when strikes hit around his cockpit. My fire caused the third A/C to burst into flame. I stayed as close to Lt. Archibald as I could to keep ourselves protected as much as possible. The enemy did not take evasive action on this pass. We maneuvered to make a second pass from the rear and closed too fast, overshooting the tail end flight. We opened our fire on a flight near the middle of the formation. Lt. Archibald destroyed the flight leader and I destroyed the wing man. On this pass their formation started to disperse. We, nevertheless, maneuvered for position to make a third pass. We again pressed the attack from the rear, this time into a swarm of A/C instead of a formation. On this pass I saw one A/C blow up and strikes on the left wing root and fuselage of another which caused the pilot to bail out. The pilotless A/C made a slight climbing turn to the left, colliding with another a/c, causing both to explode. We broke sharply to the right to avoid being hit by fragments. Lt. Archibald destroyed the first A/C on that pass. My fire caused the destruction of the other two A/C. As we were maneuvering for a favorable attacking position, I saw a few bursts of flak and I called it in to Lt. Archibald. As it was quite a distance behind us, we continued to press our attack for the fourth time. I noticed A/C approaching us from about 8 o’clock. A split second later he ceased to be a threat, as an A/C maneuvering from the opposite direction collided with him, destroying both A/C. We continued our pass and as we came into range, Lt. Archibald started firing and got hits along the fuselage of another A/C. At this time flak started breaking all around us and we broke off the attack, but to no avail. Lt. Archibald said he was hit and at precisely the same moment I found myself aflame and then my A/C blew up, throwing me out. I then pulled my rip cord and my chute opened just in time to break my fall. I didn’t have a chance to escape as my clothes were burned badly, my face and eyes, right wrist and both legs and my left hand were also badly burned. I landed beside a flak position and was immediately surrounded by soldiers. They took me into Wahn and walked me across town to a doctor’s office. There I was given a Tetanus shot and sat down to wait for transportation to a hospital. After dark an ambulance arrived and we proceeded toward the hospital. About half way there we stopped and picked up Lt. Archibald. He was in an unconscious condition. We arrived at the hospital late that night and Lt. Archibald was given saline injections. My burns were treated and we were both put to bed. Lt. Archibald did not regain consciousness for four days and was delirious for two or three days after that.

Pvt. Hunt, a captured medic, had watched our action with the enemy a/c from the hospital yard and can confirm the destruction of ten enemy A/C and the damage of one enemy plane.

The hospital is located near Wahn, Germany. The name was Hoffmonstahl, and official designation “Stalag 6-G.”

I make the following claims:

This is a CERTIFIED TRUE COPY: