His chute was afire when he jumped

This excerpt from Fogg in the Cockpit is from the narrative History of the 359th Fighter Group, Office of the Group Historian, June 1944 dated 4 July 1944:

On D plus 2, the heavies went after the bridges over the Loire, seeking to snap the fabric of the railroads there as medium bombers had previously chopped every line over the Seine.

Again the weather was execrable, haze and low ceiling, but Colonel Murphy discussed all that in a memorable line (“Weather is weather, and all weather is bad.”) and by 0627, when 45 planes took off, the mist had in fact cleared, although scud and mist rolled back over the field for the landing at 1150. There was a great score for strafing, especially in the 369th Squadron, which caught a German convoy control point at a crossroads and wiped out 26-odd vehicles.

But by now the Germans had light flak guns by the dozen at every vulnerable point, and there were two losses, 1st Lieutenant Benjamin M. Hagan III, one of the 368th Squadron originals, and Lieutenant Robert B. Sander, of the 369th. Sander was believed to have crashed in the woods near the control point but Hagan jumped after being hit in a wild strafing bee on a train southeast of Breteuil. The tall, lean, dour-faced jokester owned a questing mind, fortified by a rare depth of spirit. Aged 19 when he arrived in England, he had lived a curiously full life, although all of this was customarily masked in the prankery by which he was best known. He habitually explained he had become a fighter pilot to escape the perils of the explosives plant where he had been working and it was usually impossible to decide at what, if any point, his fantasies ceased to be fact. Two friends, Earl Perkins and Bill Simmons, followed him down and though his chute was afire when he jumped, both saw it later, empty, in a field.

The 359th FG is Inspected by the Russians

The 359th Group was chosen by General Anderson as a model station for the inspection of Major General Ivan Skliarov of the Russian Army on 9 August (1944). This was a full-dress affair, with the aircraft and all equipment shown the Soviet visitors, who spent an hour overtime in the briefing room with Colonel Swanson discussing escort and air combat tactics. 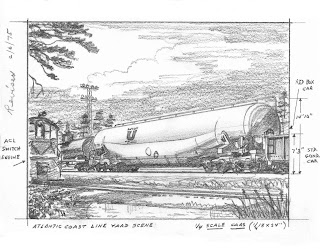 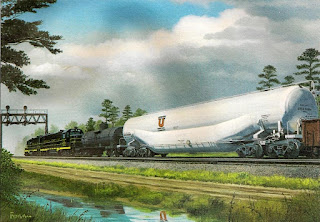 Renowned for decades as the world’s foremost railroad artist, Howard Fogg’s career spanned half a century and some 1,200 paintings. However, while his art has been welcomed for decades, few of his enthusiasts have been aware of his prior career, as a fighter pilot in the U.S. 8th Air Force during World War II. Fortunately Fogg left behind a detailed diary of his experiences, proving himself as adept with a pen as with a brush, and his day-to-day comments illuminate this brief but exciting aspect of his life, as he engaged in direct combat with the Luftwaffe at the controls of P-47 Thunderbolts and P-51 Mustangs.

Based in England with the 359th Fighter Group, Captain Fogg flew 76 missions in bomber escort and ground attack roles. From his backstage encounter in a London theater with Lawrence Olivier and Vivian Leigh, to the pre-dawn chaplain’s benediction on June 6, 1944, to a mission escorting B-17s as they flew below the snow-capped Alps dropping supplies to French freedom fighters, his diary offers a firsthand look at his fascinating and often unexpected wartime career.

Fogg in the Cockpit offers a frank and fascinating glimpse into the life of a fighter pilot, both in the sky and in wartime England. Through 1943–44 it offers a confidential perspective of life as a “flyboy,” during which Howard was awarded the Air Medal with three clusters and the Distinguished Flying Cross with one cluster.

The diary is supplemented with material by Richard and Janet Fogg as well as excerpts from the Chaplain’s Informal Monthly Reports of Morale, and the Monthly Reports of the 359th Group Historian. It also incorporates period photographs and examples of Howard’s artwork, including previously unpublished political cartoons and preliminary drawings.

From the smallest daily details of the airmen’s life to the strategic and tactical decisions that affected their fates, Fogg in the Cockpit presents a hidden side of one of the 20th century’s great artistic geniuses, with a vivid look at the life of a fighter pilot in World War II.