A tale of passion. Of heroes, hope, and the consequences of creating extraordinary music amidst the dark nights of World War II.

Swept back in time to Nazi-held France, concert pianist and composer Erin Meyer protects members of the Resistance by ghost-writing music for an influential German officer. She's now performing for her life - and for those in the Resistance. But what she thought was already a maze of confusion becomes even more mystifying when she helps a wounded British pilot evade capture. Arick Ambrose. She recognizes him from her own life and time. Erin's attraction to Arick could prove deadly as the German officer who holds the key to Erin's return demands more than she is willing to give. And if she returns home, will she ever find Arick again? For Erin, time is running out.

Review: "You'll be hooked from page one of this mesmerizing tale, which uses a beguiling method of transport to the past. The prose is smooth and satisfying, and the characters come alive. Passion and promise fill the pages, as well as fear and deception." ~ D. M. Brown, RT Book Reviews


Fogg in the Cockpit

by Richard and Janet Fogg

Prior to a distinguished career that saw him referred to as the dean of American railroad artists, Captain Howard Fogg kept a diary during his World War II combat tour in . He flew 76 missions with the 359th Fighter Group in both bomber escort and ground attack roles.

From a backstage encounter in a London theater with Lawrence Olivier and Vivien Leigh, to the pre-dawn chaplain's benediction on June 6, 1944, to a mission escorting B-17s flying down a valley in the snow capped French Alps as they dropped supplies to French freedom fighters, Fogg in the Cockpit offers a first hand look at Howard's fascinating and often unexpected story.

Review: "As an ex fighter pilot I read the book with great anticipation and was rewarded with a gem." ~ Rene Burtner, 369th Fighter Squadron Leader, 359th Fighter Group


Southern Pacific Railroad “Daylight” 4-8-4 in the special 1976 Bicentennial colors. The train toured the country from April 1975 through December 1976 and carried items of as diverse as the original and a moon rock.

Excerpt from Fogg in the Cockpit:

April 12, 1945:
On the morning of April 12th, Roosevelt mentions that he has a terrific headache. Later that day he dies. The doctor diagnoses that the President has suffered a massive cerebral hemorrhage. Harry Truman is sworn in as the 33rd President of the United States of America.

April 15, 1945:
In Millville, New Jersey, where he is in charge of ground school, Howard continues to teach young pilots while also keeping current on his own flying. He is honored when asked to join a handful of pilots to fly a special mission: to overfly the interment of President Roosevelt. 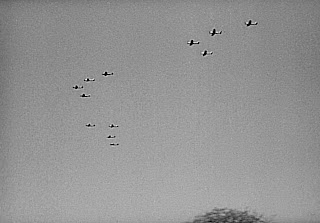 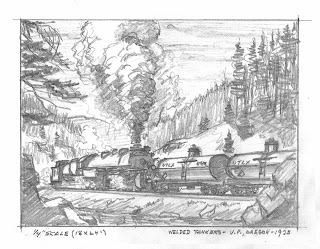 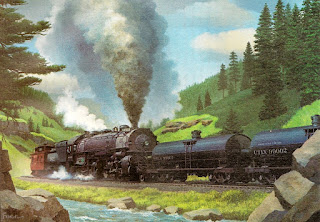